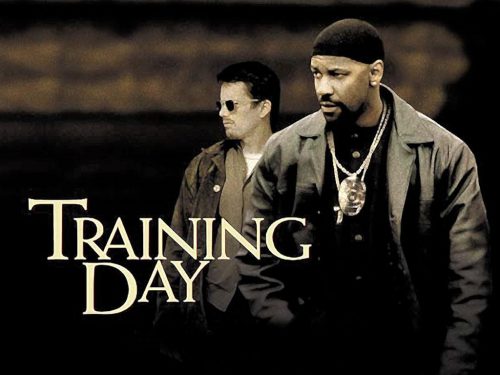 I hadn’t seen it for a while & I’d forgotten just how good Washington was in it.

Unless you’ve been under a rock for years, you’ll know the plot.

Washington plays a dodgy narcotics cop that has upset the Russian Mob whilst on a trip to Vegas.

He has to give them a $1-million before midnight to make things right, or he’s a dead man.

He ends up taking a clean-as-a-whistle rookie out with him for his first day or ‘Training Day’ whilst he’s doing
his dodgy stuff, getting the money together to save his arse.

The rookie, who’s played by Ethan Hawke, actually ends up kicking his arse at the end and stopping him from being able to take the money.

Despite all the power and influence of the badge, Washington ends up gunned down at the end.

Moral of the story being ‘cheats never prosper’!

Kind of like when you’re trying to convince everyone around you that everything is ‘cool’, you’re fine and nothing is wrong.

When you know that you’re kidding yourself, taking shortcuts and cheating yourself out of the life you really want.

Granted, you’re not going to be gunned down with automatic weapons by the Russian mob at the side of the road, that would be quite a dramatic ending!  But that doesn’t mean that the consequences could be no less severe if you let things continue to slide.

There is no good time to be struck with a heart attack, or a stroke….

Don’t worry though, I have more than a bullet-proof solution for you if you’re ready to go all in and stop BSing yourself.

Click here, tell me why you’re the type of man we want in Alpha Man Elite.

Get on a call today or tomorrow and we’ll get you started.